In 1918, from Gardner in the state of Kansas, Chuck and Frank Cramer created the CRAMER Chemical Company.

In 1932, Frank and Chuck became the first official
coaches of the United States’s olympics athletics team. Five years later, Frank Cramer was a founding member of the NAIA: National Association of Intercollegiate Athletic.

In 1950, the CRAMER brothers participated in the creation of the National Athletic Trainer’s Association.

In 1996, CRAMER PRODUCTS became the official supplier to the NATA, the National Association of American trainers and sports specialists.

In 2004, the company strengthened its activities and took over COSOM, specialized in the production of educative materials.

Four years later, in 2008, CRAMER PRODUCTS
bought out ACTIVE ANKLE, specialist in the manufacturing of ankle supports for sports and medical purposes.
With nearly a century of experience and over 500 products to its credit, CRAMER Products is often recognized in the United States and the rest of the world as a
pioneer in sports medicine.

Reveal the champion within you. Details make a difference. Our quality products allow you to push yourself always further and succed. CRAMER provides you with specific products to take no chances and improve athletes performance.

Be ready in any event. Our field experience and knowledge allowed us to create high performance products. We also invented solutions for you to carry them with you.
Cramer has a full range of athletic training products. Ensuring you handiness and utmost performance.
Modular design to allow for separation and organization of supplies needed in particular Waterproof material that won’t hold dirt like traditional materials.

Recover and start over stronger. Day after day your efforts affect the condition of your muscles and articulations. A poor recovery increases the risk of injury.
Our massage products provide better preparation before activity and a profound recovery.
Cramer provides you with massage products recognized by sports medicine professionals.
The Camphorated oil can be used to treat sprains, joint pain and muscle soreness. It is known for it’s strong, pungent aroma. Because large doses can be toxic, it is tightly regulated. External use only.

Prefer victory to injury. While training or competing, muscles and articulations are put to severe test.
Our products help athletes to be in condition so they can focus on victory. CRAMER offers cold therapy and first aid products that will ensure better preparation.
Lasting effects during the efforts and a true recovery.

To exceed oneself while easing the pain, is one of the main purpose of braces and supports. Our stabilization products help not only prevent injuries but also to reeducate the athlete. Cramer has the widest range on the market. Our products will bring you stability while allowing the agility required to perform at your best.

The Active Ankle® Volt™ is for any athlete looking for the highest level of protection and support available today without excess weight and bulk. Its carbon fiber reinforced polypropylene shell provides lightweight protection without sacrificing the stability and support. The custom cut and molded EVA foam pads provide a more comfortable fit and improved durability compared to the foam or neoprene pads found in other rigid braces. Its redesigned bilateral hinge provides a smoother motion than previous models and the molded bearing design allows for free and easy movement without the normal amount of plastic on plastic resistance.

Tape is one of the main assets in sports medicine. It plays a key role before pratice and competition, Cramer provids you with all the  necessary products to prepare an efficient strapping or tape job allowing the athlete to achieve high performance.

Made in Europe, our best selling tape is more adhesive, thicker and easier to tear. 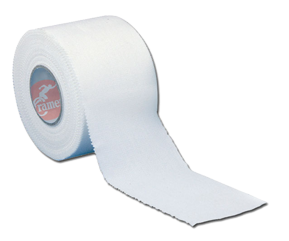